The Islamic Movement in Nigeria has filed a lawsuit to challenge the proscription of the group by the Federal Government.

Lagos lawyer,  Femi Falana filed the suit on behalf of the group  at the Federal High Court in Abuja.

The Shiite group asked the court to set aside the ex-parte order made on July 26 proscribing IMN as a terrorist organisation.

They also want the court to set aside the order restraining any of their members from participating in the activities of the group.

The suit was predicated on four grounds, one of which the group said the order was made without jurisdiction as it was made against a non-jurist body.

The Shiite group contend that the order was made without giving the respondent (that is the group) a right to a fair hearing.

According to it, the order is a breach of the fundamental rights of all members of the IMN to a fair hearing and freedom of association.

They, therefore, want to the court to set aside the order.

However, no date or judge has been assigned to the suit. 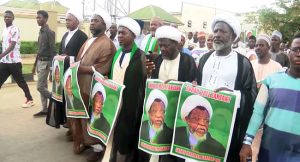 The Federal Government had obtained a proscription order against the IMN, following a series of protests by the group in the Federal Capital Territory.

They have been staging protest in the nation’s capital to demand the release of their leader, Ibrahim El-Zakzaky, who has been in detention since 2015.

At least three of the demonstrations by the Shiites group in July turned violent, leave some people dead and others injured.

The proscription order against the IMN obtained by the government has sparked mixed reactions, as some faulted the move while others commended it.

The group’s  lawyer Mr Falana described the government’s action as ‘immoral and illegal’.

He alleged that the order was opportunistic on the part of the Sunnis occupying public offices to use the instrumentality of the state to liquidate the Shiites.

On July 30, the Inspector-General of Police, Mohammed Adamu, officially declared that the IMN has been proscribed and all protests by the movement banned.