Police arraign Melaye on charges of attempted suicide,escape from custody

Senator Dino Melaye representing Kogi west has been arraigned in an Abuja High Court in Apo on a six counts charge bordering on attempted suicide, attempt to escape from custody and damage of police property.

When the charge was read by a court official, Melaye denied committing the offences,

He said Melaye, while being conveyed in a police vehicle to Lokoja forced his way out and escaped.

Izinyon  informed the court that the defendant sat on the ground, holding a substance in one hand and threatening to drink it to kill himself so that he could put the police officers in trouble.

The prosecutor also said that the defendant broke the glass of the vehicle with his elbow and caused damage to police property.

Lawyer to the defendant, Chief Mike Ozekhome (SAN) urged the court to allow the bail granted to the defendant at the Magistrates’ Court Wuse on the same charges to continue.

The prosecution opposed the application, arguing that bail is at the discretion of the court.

Justice Oriji also ordered him to produce two sureties in like sum, as part of the bail condition.

The judge ordered that the sureties must be directors in the civil service, reside in the FCT, and depose to affidavits of means 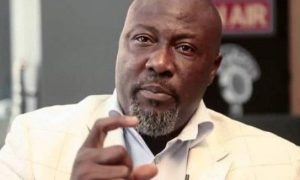