The National Judicial Council (NJC) has queried the Acting Chief Justice of Nigeria (CJN), Justice Tanko Mohammed, few days after his inauguration at the Presidential Villa by President Muhammadu Buhari.

It was learnt that the two judges were given seven days to respond to the queries.

While Onnoghen was queried following the allegations leveled against him on his failure to declare all his assets, as stipulated by law, Mohammed, was told to explain why he allowed himself to be sworn-in by President Buhari without the recommendation of the Council, as required by law.

Onnoghen and Mohammed were given seven days to respond.

The third most senior Supreme Court Judge, Justice Olabode Rhodes-Vivour of Lagos State, will replace the Justices if the Council decides to dismiss them.

NJC has also adjourned till Feb. 11, four days to the presidential election. 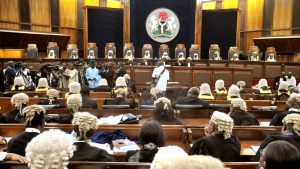