Kwara State Governor, Abdulrahman Abdulrasak has said that his government is poised to clear salaries and pensions backlog before implementing the new minimum wage.

The Governor, who addressed civil servants in the state on Friday, stressed that his administration hopes to end the salary backlog and discuss with workers on best ways to address wage-related issues.

“The problems are a lot, we can’t resolve them in one, two, three, four months, but we need to start resolving them. Like the issues of salary; it has been brought to my attention that the May salary is still outstanding. That will be paid immediately”.

“You have to remember that some people are on half salary and they have not been paid. Some people have been promoted a few years ago and are still on the old salary scale” the governor said .

Gov. Abdulrasak added that even after paying, the state cannot afford to pile a backlog of salaries.

The truth is that we want to get to a stage where there is no backlog of salaries and pension, thats where we are heading to now.

We need to clear this before coming to the issue of the minimum wage, which we also need to sit down and discuss because we cannot agree to pay and start backlog again. The intention is to pay; we got to the transition program and a lot of issues we have seen. 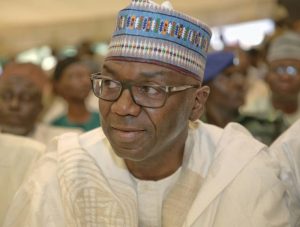