In a commando style, Melaye rescued from police, re-arrested

In what looked like a thriller movie, some unidentified men sensationally whisked away the lawmaker representing Kogi west in the senate, Senator Dino Melaye from armed policemen taking him to Lokoja to face trial for allegedly supplying arms to two thugs.

The armed policemen from the Special Anti-Robbery Squad were dazed as two Two Toyota Hilux Vehicles blocked the Police vehicle conveying the Senator around Area 1 Round About in Abuja and in the process the Senator jumped out of the vehicle through the window and was seized from the Police.

He was reportedly injured and now admitted at Zankli Hospital in Mabushi area of Abuja.

There was a picture of him on the bare floor by a roadside, but there was no single policeman in view. Other pictures, showed the senator being taken into an ambulance and hospital in Abuja

The Police team re-enforced and trailed Senator Melaye to Zankli Hospital, Abuja where he was re-arrested. The police said that the Senator would be arraigned in court without further delay.

The Kogi state police command had arrested two suspects KABIRU SAIDU a.k.a OSAMA “31 YRS” and NUHU SALISU a.k.a SMALL “25 YRS” on the 19th January, 2018 at Ogojueje in Dekina Local Government Area of Kogi State. During investigation, they confessed to the various criminal roles they played in the commission of several kidnappings and Armed Robbery in different towns across Kogi State and its environs for which they have been on the wanted list of the Police for more than two years now.

“He further revealed that Senator Dino Melaye handed over a bag containing one (1) AK47 rifle, two (2) Pump Action guns and the sum of four hundred and thirty thousand naira N430, 000.00 to share with his boys.

“Consequent on this indictment on the Senator, The Nigeria Police Force, sent a letter of investigation activities/invitation dated and acknowledged on 2nd March, 2018 addressed to the Senate President, Federal Republic of Nigeria informing and requesting him to release Senator Dino Melaye to report to the Police on the 7th March, 2018 to answer to criminal offences of Conspiracy and Unlawful Possession of Prohibited Firearms leveled against him, and another separate letter was equally written in this regard, this was to enable the Police Investigation Team carryout a discreet and thorough investigation into the case. But Senator Dino Melaye refused to honour the Police invitations. 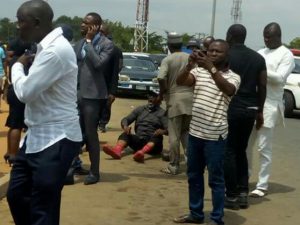 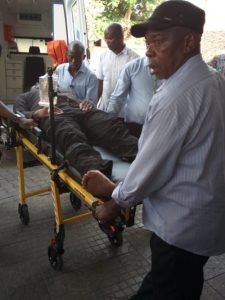