The film is an  American superhero film based on Marvel Comics superhero team ‘The Avengers’.

Funke played the role of a  Dora Milaje member in the film directed by Anthony Russo and Joe Russo. In the list of the cast, she is named as No. 70. The Nigerian actress plays as  a member of the Black Panther’s guards, the ‘Dora Milaje’ – who are a team of women who serve as the personal bodyguards of the Black Panther.

The film is set for release 25 April in the Netherlands.

It tells the story of how the Iron Man, Thor, the Hulk and the rest of the Avengers unite to battle their most powerful enemy yet — the evil Thanos.

“On a mission to collect all six Infinity Stones, Thanos plans to use the artifacts to inflict his twisted will on reality. The fate of the planet and existence itself has never been more uncertain as everything the Avengers have fought for has led up to this moment”. 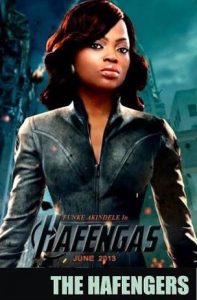