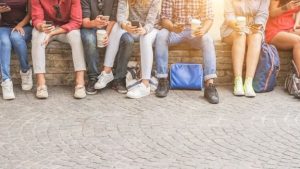 Overuse of mobile phones by university students may have offline consequences such as lower grades, drinking problems and more sexual partners, a study says.

In a survey of more than 3,400 people taking degrees in the US, those who said they had problems with the amount of time they spent on their phones also reported having more sexual partners.

But they also were more likely to report anxiety or depression.

One psychiatrist said the findings were “concerning”.

Its aim was to assess mental health and wellbeing among university students and to see what impact mobile phones had on them.

To establish whether mobile phone use was excessive, students were asked a variety of questions, including:

One in five students answered yes to enough questions to be deemed as overusing their phones, with more than 60% of these being female.

The study found that the proportion of students reporting two or more sexual partners in the past 12 months was significantly higher among those also reporting overuse of mobile phones – 37.4% compared with 27.2% who reported no problem use.

The proportion with six or more sexual partners was more than double among those who said they overused their smartphones.

The reasons for this are difficult to pinpoint and are likely to be varied, said Dr Sam Chamberlain, one of the authors and an honorary consultant psychiatrist at the University of Cambridge.

“It could be that people are using smartphones to date via apps, but they also might be neglecting more normal relationships because of overuse of their phones,” he said.

“The strongest finding was that people reporting problematic use of their phones were also more likely to have the trait of impulsiveness, and this could also play a part in the number of sexual partners they have.

“If this was a healthy thing we’d expect to see better self-esteem and less mental health issues but the opposite was the case,” he added.

The researchers also found that excessive drinking was significantly higher in those reporting problematic smartphone use, compared with those who felt their mobile use was normal. But they found no significant link with any other form of substance abuse or addiction.

“It’s easy to think of problematic smartphone use as an addiction, but if it was that simple, we would expect it to be associated with a wide range of substance misuse problems, especially in such a large sample, but this does not seem to be the case,” said Dr Chamberlain.

Some experts have suggested that excessive gaming, which is now classified as a disorder by the World Health Organization, be extended to include more general overuse of screens.

Previous studies have pointed to a link between excessive use of mobiles and lower academic achievement and this report also found a connection.

“Although the effect of problematic smartphone use on grade point averages was relatively small, it’s worth noting that even a small negative impact could have a profound effect on an individual’s academic achievement and then on their employment opportunities in later life,” said University of Chicago’s Prof Jon Grant.

While there are an increasing number of studies into mobile phone use and its consequences, none have definitively proved that excessive use causes mental health issues – and there needs to be more funding for deeper research, thinks Dr Chamberlain.

“We need studies that follow young people over a long period of time,” he said.

Dr Abigael San, a member of the British Psychological Society, said of the study: “It is concerning and I’m glad the work is being done.

“All of these effects are very real and are problems discussed in therapy sessions. Often people don’t come with a smartphone issue – instead it is a mental health issue or a relationship break-up – but more than often smartphone usage plays a part.”

The results of the study have been published in the Journal of Behavioral Addictions.

Digital Switch Over: Lai Mohammed to testify as prosecution witness