Eight days after being held up in his house, Senator Dino Melaye has  finally surrendered to the police.

He left his house with some lawmakers from the National Assembly who paid him a solidarity visit.

They went to the police in company of Melaye’s lawyer, Mr. Mike Ozekhome.

Melaye had been invited by the police to answer allegation of attempted murder.

He is alleged to have been with his thugs who shot and injured a police officer on the 19th July 2018.

Police spokesman Jimoh Moshood said that the police officer was yet to recover from the gunshot injury he sustained during the attack and was under intensive medical care.

An Abuja high court had on Thursday refused to grant Dino Melaye’s application to order the removal of police blockade on his residence.

The  Police had said its men sent to arrest Senator Dino Melaye in his residence in Abuja will not retreat until the senator surrenders himself for arrest and investigation.

According to Moshood, the officers have a duly obtained Warrant of Arrest to pick the senator, representing Kogi West.

“The claim by the Senate President in the Media that the Police did not submit a letter of invitation to the Clerk of the National Assembly is therefore incorrect as can be seen on attached letter with acknowledgment stamp of the Clerk, National Assembly, Abuja “24 JUL 2018“. Despite this, Senator Dino Melaye bluntly refused to report himself to the Police till date.

For avoidance of doubt, attached to this Press Release are the copies of pictures of the shot Police Officer, Sgt. Danjuma Saliu, the Police Invitation Letter addressed to the Clerk of National Assembly, Abuja and the Medical Report from the Federal Medical Centre, Lokoja, Kogi State, confirming the admission of Sgt. Danjuma Saliu into the Hospital for treatment of the gunshot injury he sustained from the attack by Senator Dino Melaye and his armed thugs while on Stop and Search duty along Aiyetoro Gbede, Mopa Road in Kogi State on 19th July, 2018.

Meanwhile the Senator has been admitted to hospital, hours after he surrendered himself to a police team investigating a charge of attempted culpable homicide.

The police revealed this in a statement by spokesman Jimoh Moshood. Moshood said the senator was in stable condition.

Moshood did not indicate the nature of the senator’s illness or in which hospital he is being treated.

Moshood said before Melaye was moved to the unidentified hospital, he faced an interrogation by the police team probing his involvement in alleged culpable homicide: the shooting of a policeman by thugs embedded in a convoy of the senator on 19 July, 2018 in Kogi State. 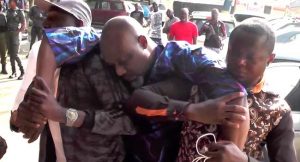 Court rejects application to set aside interim forfeiture of $2.8m