Digital Switch Over: Lai Mohammed to testify as prosecution witness 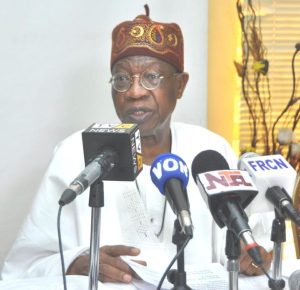 Justice Folashade Ogunbanjo-Giwa, granted the application by the prosecution, the Independent Corrupt Practices and Other Related Offences Commission, ICPC following the withdrawal of the objection earlier raised by the defendants.

ICPC is prosecuting the Director-General of the National Broadcasting Commission (NBC) Ishaq Kawu in the court, for alleged abuse of office and money laundering

The Commission had filed a 12-count charge against Kawu, Lucky Omoluwa and Dipo Onifade, the Chairman and Chief Operating Officer of Pinnacle Communications Limited respectively.

After calling two witnesses, the ICPC filed the application seeking to add the former minister and Shuaibu Sabo, a Bureau de Change operator as additional witnesses in the trial.

Dr Alex Izinyon, SAN, Counsel to Omoluwa and Onifade, had filed a motion prohibiting the prosecution from listing Mohammed and Sabo as additional witnesses.

At  the resumed hearing of the trial , Mr Abayomi Oyelola who held the brief of Iziyon, said they were withdrawing the motion opposing the list of additional witnesses by the ICPC.

Justice Oginbanjo-Giwa, thereafter struck out the motion by the defendants.

The judge has also granted the applications by the defendants seeking the release of their international passports to enable them travel abroad for official functions.

The court’s decision was also sequel to the withdrawal of the counter affidavit of the ICPC challenging the release of the traveling documents.

ICPC lawyer, E. A. Shogunle said he was withdrawing the counter affidavit because the period the applicants would be travelling fell within the court’s vacation.

The lawyer also informed the court that the prosecution had complied with the directive of the court to verify the addresses of the sureties to the second and third defendants as given in the bail bonds and filed same.

Shogunle, however said the prosecution could not verify the address of the surety to the first defendant (Kawu) because there was an error in the house number provided in the bail bond.

He said the lawyer to the first defendant would have to correct the error in the house address at the court registry before he could file a verifying affidavit.

The judge, however, held that since the prosecution had withdrawn the counter affidavit to the motion, the travel  documents of all the defendants should be released to them.

The judge, however, ordered that the defendants should return the traveling documents to the custody of the DCR upon their return not later than Sept. 25.

She directed the sureties to the defendants to swear respective affidavit to the effect that they would surrender themselves for trial in case the defendants abscond.

Specifically, she said the sureties would take the place of the defendants and would remain in detention until the defendants surrender themselves for trial.

Justice Oginbanjo-Giwa adjourned the case until Oct. 2 for continuation of hearing.