Court sends senior lawyer, Nwobike to one month in jail

A senior advocate of Nigeria, Joseph Nwobike has been sentenced to one month jail for bribing judges and court officials.

The sentence was handed down  by Justice Raliat Adebiyi of an Ikeja high court who ruled  that Obidike bribed court officials to pervert justice.

Nwobike was found guilty on 12 counts, each of which earned a month’s imprisonment. But the sentences will run concurrently.

Nwobike was prosecuted by the Economic and Financial Crimes Commission, EFCC, on 11 counts bordering on perverting the court of justice and offering gratification to public officials.

One of the counts read: “That you Nwobike, on the 19th day of March, 2015 in Lagos, within the jurisdiction of this Honourable Court, intentionally gave the sum of N750, 000 to Hon. Justice Mohammed Nasir Yunusa of the Federal High Court directly through your United Bank for
Africa Plc Account No.1002664061 in order that the said Judge acts in the exercise of his official duties.

Another count read: “That on the 28th day of September, 2015 in Lagos within the jurisdiction, you intentionally gave the sum of N300, 000 to Hon. Justice Mohammed Nasir Yunusa of the Federal High Court indirectly through Awa Ajia Nigeria Limited’s account No. 0000971931 domiciled in Access Bank Plc, belonging to Hon. Justice Nganjiwa
Hyeladzira Ajiya of the Federal High Court, in order that the Hon. Justice Mohammed Nasir Yunusa acts in the exercise of his official duties.”

In the compact disc, which was played on a projector mounted within the court room, Oyedepo told the court how Nwobike had sent text messages, at various times, to one Jide, a Deputy Registrar with the Federal High Court, Lagos.

He told the court that Nwobike admitted to have received
and read a message from Jide on September 23, 2014, saying, “Kuya may not resume yet”. 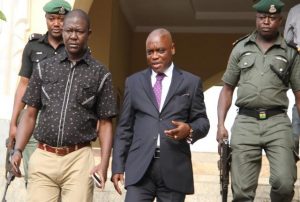