One of China’s biggest technology companies has begun mass production of a self-driving bus.

Baidu made the announcement after building its 100th Apolong vehicle at its factory in the country’s south-eastern Fujian province.

It said the vehicles would initially be put to commercial use within Chinese cities but added it was also targeting foreign markets.

The company is one of several competing to sell “level-4 autonomy” buses.

The classification – set by the transport engineering body SAE International – refers to highly automated driving systems that can cope with most driving conditions, even if a human fails to respond appropriately to a request to intervene.

It is one step below the maximum level-5 tier, which extends to all driving scenarios, including dirt roads and unusual weather conditions.

He said: “2018 marks the first year of commercialisation for autonomous driving.

“In the past, China exported cheap commodities to the world. In the future, China will export AI technology to the world.”

The Apolong bus can seat up to 14 people, and has been developed with a local vehicle manufacturer.

It has no driver’s seat, steering wheel or pedals.

Baidu envisages it being used for “last-mile” drop-offs within enclosed areas, such as airports and tourist sites.

The company said partners would soon put it to use in Beijing, Shenzhen, Wuhan and other Chinese cities.

It added that a deal with Japan’s Softbank Group could also bring the vehicle to Tokyo’s roads.

In a separate Japanese-language press release, Softbank said it intended to start using 10 Apolongs for “demonstration tests” within Japan by early 2019.

It demonstrated their use in level-3 mode – where a human is expected to take control if required – at Tokyo’s Haneda Airport in February. 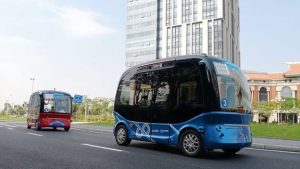