Buhari concerned about Nigerians at bottom of pyramid says Osinbajo

Osinbajo spoke today at the May Day rally in Abuja, which has as its theme, “Another 100 Years of Struggle for Jobs, Dignity and Social Justice in Nigeria.

He said the Muhammadu Buhari administration truly believes in the theme.

Its policies are biased in favour of those at the bottom of the pyramid, who are the central focus of all economic planning and budgeting.

Osinbajo said the administration is concerned about the welfare of Nigerian workers, artisans and traders at the bottom of the pyramid.

“The welfare and well-being of all these Nigerians who work everyday and render honest services every day is the true benchmark of our commitment as government and a people to social justice and dignity of all Nigerians.

“We will continue to commit ourselves to the cause of improving the lot of every working Nigerian and providing for those who cannot work.

“In this regard, the new National Minimum Wage, which Mr. President signed into law a few days ago, shall be fully implemented by the current administration”, he said.

Osinbajo reminded the workers of the labour friendly policies of the government, how despite the difficult economic environment the government did not contemplate retrenching the workforce.

He also spoke about the various bailout government gave to the states to enable them pay workers.

“On assumption of office in 2015, in spite of the daunting economic challenges, which confronted us at the time, we ensured that no worker was retrenched across the country. We further kept faith with this commitment by providing bailout funds for States unable to pay salaries and other benefits in order to pay accumulated arrears. We also released the Paris Club refunds owed since 2005 to make sure workers were not owed anything”.

“We shall continue to provide the enabling environment for higher productivity, industrial peace and harmony, as well as a congenial atmosphere for effective collective bargaining amongst trade unions and employers, while also protecting fundamental rights and other lawful rights of the Nigerian people and especially people who are at work,” the vice-president said. 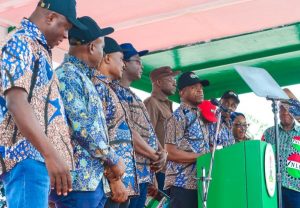