Home›News›British ambassador to US resigns
News

British ambassador to US resigns 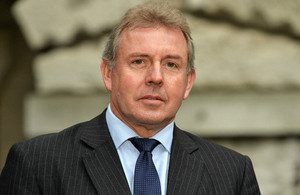 British ambassador to the US, Sir Kim Darroch has resigned as a row over leaked emails critical of President Trump’s administration escalates.

The US president had branded him “a very stupid guy” after emails emerged where the ambassador had called his administration “clumsy and inept”.

Theresa May said Sir Kim’s departure was “a matter of deep regret”.

He said he wanted to put an end to speculation about his role and the leak had made it “impossible” to continue.

In a letter to the Foreign Office, Sir Kim said: “Although my posting is not due to end until the end of this year, I believe in the current circumstances the responsible course is to allow the appointment of a new ambassador.”

The leak was described as “malicious” by Sir Simon McDonald, permanent under secretary and head of the diplomatic service, who told Sir Kim: “You are the best of us.”

He told the Commons’ foreign affairs committee it was the first time in his career that a head of state had refused to work with a British ambassador, after President Trump said the US would “no longer deal with” Sir Kim.

Mrs May said he had had the full backing of the cabinet and had given a “lifetime of service” to the UK, for which he was owed an “enormous debt of gratitude”.

“Good government depends on public servants being able to give full and frank advice”, she said.

She spoke of the importance of “defending our values and principles particularly when they are under pressure”.

His resignation has prompted widespread support for Sir Kim while some have questioned Tory frontrunner Boris Johnson’s stance.

Mr Johnson had refused to say, during the Tory leadership debate on Tuesday night, whether he would keep Sir Kim in post if he became prime minister.

Following Sir Kim’s resignation, he said he was “a superb diplomat” and whoever was responsible for the leak “has done a grave disservice to our civil servants”.

Asked why he was not more supportive of Sir Kim, he said it was “wrong to drag civil servants into the political arena”.

“He’s basically thrown this fantastic diplomat under a bus to serve his own personal interests,” he said.

Tory MP and chairman of the Commons’ foreign affairs committee Tom Tugendhat said in a tweet: “Leaders stand up for their men. They encourage them to try and defend them when they fail.”

However, Sir Michael Fallon – a supporter of Mr Johnson – said the Tory leadership hopeful had made it “very clear that the relationship with the United States is what comes first”.

Fellow Tory leadership candidate and Foreign Secretary Jeremy Hunt said he “profoundly” regretted the “outrageous” leak that led to Sir Kim’s departure. “It should never have come to this”, he added.

BBC political editor Laura Kuenssberg said: “Failing to back Darroch last night was the first major act of the still hypothetical Johnson premiership that led to his resignation.”

Police charge 38 shiite for possession of firearms, destruction of property